DARK SECRETS OF A TRILLION DOLLAR ISLAND: GARENNE - THE CREDIT DUE TWO BLOGGERS WHO JUST WOULD NOT QUIT 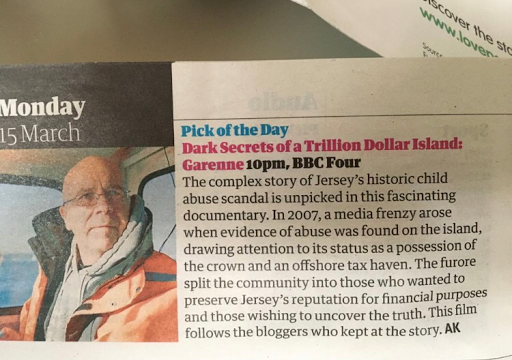 Blogger Neil McMurray - Trawling for justice
I thought that I was done with blogging - well, at least until next year, perhaps...
Nevertheless, with the long-awaited release of Camilla Hall's (Rogan Productions) documentary 'Dark secrets of a trillion dollar island: Garenne' this coming Monday on BBC4's Storyville I simply felt that I had to briefly post something to say how pleased I am to see that the two brave and indefatigable Jersey bloggers, Neil McMurray and Rico Sorda were being afforded the true credit that they are both due for helping drag the Jersey Establishment kicking and screaming in to the 21st Century.
Oh the island is not there yet, believe me. Indeed, in their entrenched attitude of denial to admitting the need, never mind the benefit to all of social justice the Jersey 'Judiciary' and a number of aging political relics likewise the fact is that we are probably no further ahead here than the morning after the 28th September 1769! 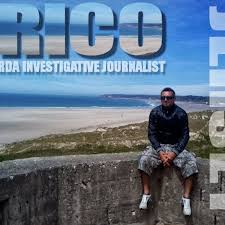 Blogger Rico Sorda
But the fact is Jersey would not have even progressed this far without the sterling efforts of McMurray and Sorda. The pair were, and shall ever remain as crucial to the hard-fought victories won as other, by nature far more high-profile, figures who also led the way: figures such as former Senator Stuart Syvret; former Police Chief Graham Power; and his Senior Investigating Officer Lenny Harper; US journalist Leah McGrath Goodman - who just wouldn't let the story die internationally with yesterday's news; and, of course, a tiny handful of other political figures on Jersey of which I was proud to be one.
Of course, the most important people of all in this sorry saga - the true heroes and heroines - are the victims who never gave up and showed their abusers and the senior Judicial and Political figures who fought to re-bury their suffering in the 'interest' of Jersey's repuation as a financial centre that they would not be silenced by strutting Sawdust Caesars in red cloaks and pinstripe suits.
Yet for all of this Neil and Rico are deserving of an extra special mention within despatches. The pair didn't have the public platform and responsibility some of us had, and felt obliged to try and honour. They were just two ordinary members of the public; family men, who disgusted at what they were learning worked and worked, dug and dug, because they believed in 'doing the right thing'. 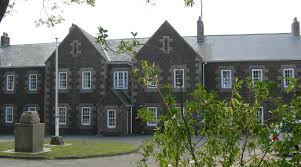 Haut de la Garenne
Just what Neil McMurray and Rico Sorda contributed cannot be overstated - and to even try and list it all here would, quite frankly, not be possible in ten blog postings let alone one.
Suffice to say then perhaps, that from my own perspective, the report I published from the Scrutiny (Select Committee) Panel which I Chaired - blowing out of the water much of the unparralled barrage of half-truths, propaganda and even downright falsehoods spun to discredit Harper and Power - and happily sold to the public as fact by the Jersey mainstream media, would never have happened without Neil and Rico having approached me as a politician with the evidence from their research.
The pair deserve the very highest of accolades.
By Trevor Marc Pitman at March 14, 2021

DARK SECRETS OF A TRILLION DOLLAR ISLAND: GARENNE - THE CREDIT DUE TWO BLOGGERS WHO JUST WOULD NOT QUIT

Blogger Neil McMurray - Trawling for justice I thought that I was done with blogging - well, at least until next year, perhaps...  Neverthel... 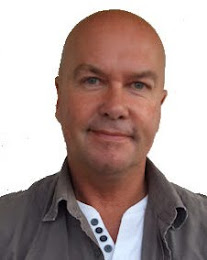 Trevor Marc Pitman is a freelance writer & blogger, researcher, political activist and social justice campaigner. Born in the British Crown Dependency Tax Haven of Jersey, he graduated in Youth & Community Development at De Montfort University. An outspoken advocate of 21st Century Socialism Trevor subsequently went on to twice win election to Jersey’s archaic government as an MP. Currently based in the West Country after a number of years travelling and living in France, his first book “Wake me when it’s over!” is set for release in summer 2020’.